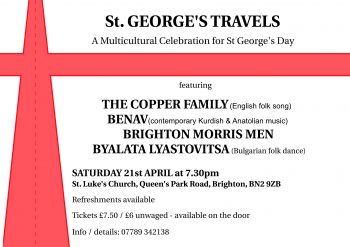 This concert celebrates St George and his legacy with performers from a variety of national and ethnic backgrounds, all of whom currently live in Sussex.

Brighton Morris are delighted to be performing alongside

He lived in the Middle East in the 3rd century, where he was put to death for his beliefs. He was a slayer of dragons, a healer, a liberator of slaves and a bringer of good fortune. Over the centuries, his influence has spread around the world, inspiring stories, music, dance and celebrations wherever it goes.

Tickets are available on the door £7.50 / 6 (this concert is not organised by Brighton Morris). Refreshments.

Please note that this concert takes place on Saturday April 21st, rather than St George’s Day itself (April 23rd) which falls on a Monday this year.